The late 1800’s in Europe was a time when versatile gun dogs were developed in order to accommodate those who hunted waterfowl, upland and furred game, but could only afford the luxury of one dog.  The unique Pudelpointer breed was born in Germany in 1881, with the breeding of the dam, “Molly”, a German Hunting Pudel to the sire, “Tell”, an English Pointer. The focus of the mix was to combine the outstanding specialized working abilities of the two dogs into one. The Pudel characteristics offered intelligence, love of water, retrieving instinct, train-ability and willingness to please, packaged in a water protective, non-allergenic coat. The Pointer provided an unending desire to hunt, birdiness, pointing instinct, field nose and strong endurance. The result was a unique breed that did well in the home, as well as embodied the desire and drive that ranked it among top performers in Germany’s field and hunt tests.

In the breeding process, it was found that the Pudel proved to be the stronger breed in passing its genes.  Therefore, more Pointers were introduced to the breeding process to generate the versatile characteristics it is known for today. During the first 30 years, only 11 Pudels were used against 80 Pointers to maintain the particular breed. From then on, occasionally Pointers were introduced, especially after the depleted stock following two World Wars.

What is a Pudelpointer? 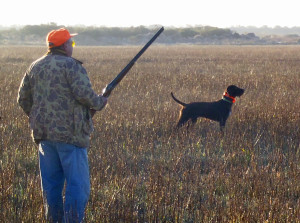 A Pudelpointer is medium sized, between 22 and 26 inches at the shoulder, and weighs anywhere from 45 to 70 lbs. Pudelpointers are predominantly solid in color, which can range from dark brown to the color of autumn leaves, and occasionally black. White markings on the chest and paws are also allowed. The ideal coat is harsh, wiry and dense, though pleasing to the touch. The tail is docked at two thirds of its original length. A sound temperament and being eager to please, makes the breed a pleasure to work with in the field as well as in the home. 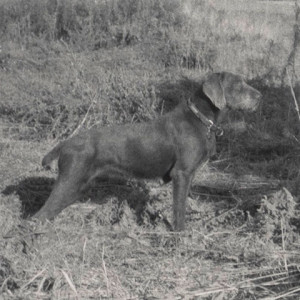 It was in 1956 that world-renowned trainer, Sigbot “Bodo” Winterhelt brought the breed to North America. His intent was to establish a breed of stable, versatile hunting dogs with traits that would continue generation after generation. He also wanted to protect this special breed from the fate of other sporting breeds – deterioration on the show bench. In his efforts, Bodo also started the North American Versatile Hunting Dog Association (NAVHDA), in order to protect and support the training and fair testing of versatile hunting dogs. 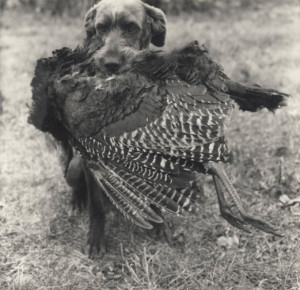